While on my September 2006 trip to California, I couldn’t pass up the opportunity to visit the unique and spectacular Mono Lake which is located in California’s Eastern Sierra. In the mid 1900’s, the State of California diverted water in the Mono Basin area to the growing city of Los Angeles, which in turn lowered the water level of Mono Lake and allowed the limestone pillars, or “Tufa” to become visible. At 5:04 am, just before sunrise, I loaded my camera onto my tripod and took a silhouette photo of the Tufa.

A little bit under an hour later, the Eastern Sun had risen and illuminated the South Tufa in a golden light, where I captured an image of them with the Sierra mountains in the background.

It was a bitter cold night in the desert, and I noticed behind me rays of light from the Sun shining through the fog across the desert terrain. I quickly rushed over and took a photo.

On my way out, I decided to take a photo of the road sign to Lee Vining set against the now fully illuminated Sierra mountains, along Route 395. 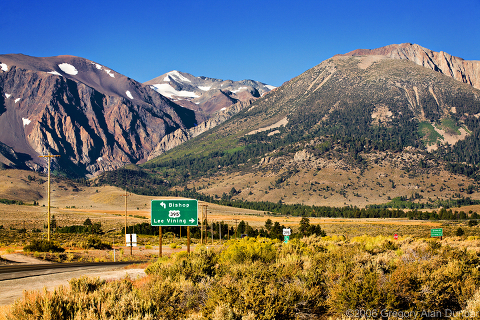 All photos are copyright © Gregory A. Dunbar. Usage without permission is forbidden and strictly enforced. If you would like to use any of my photos for any purpose, please contact me and I will provide you with a license.|ProPhoto Photography Website